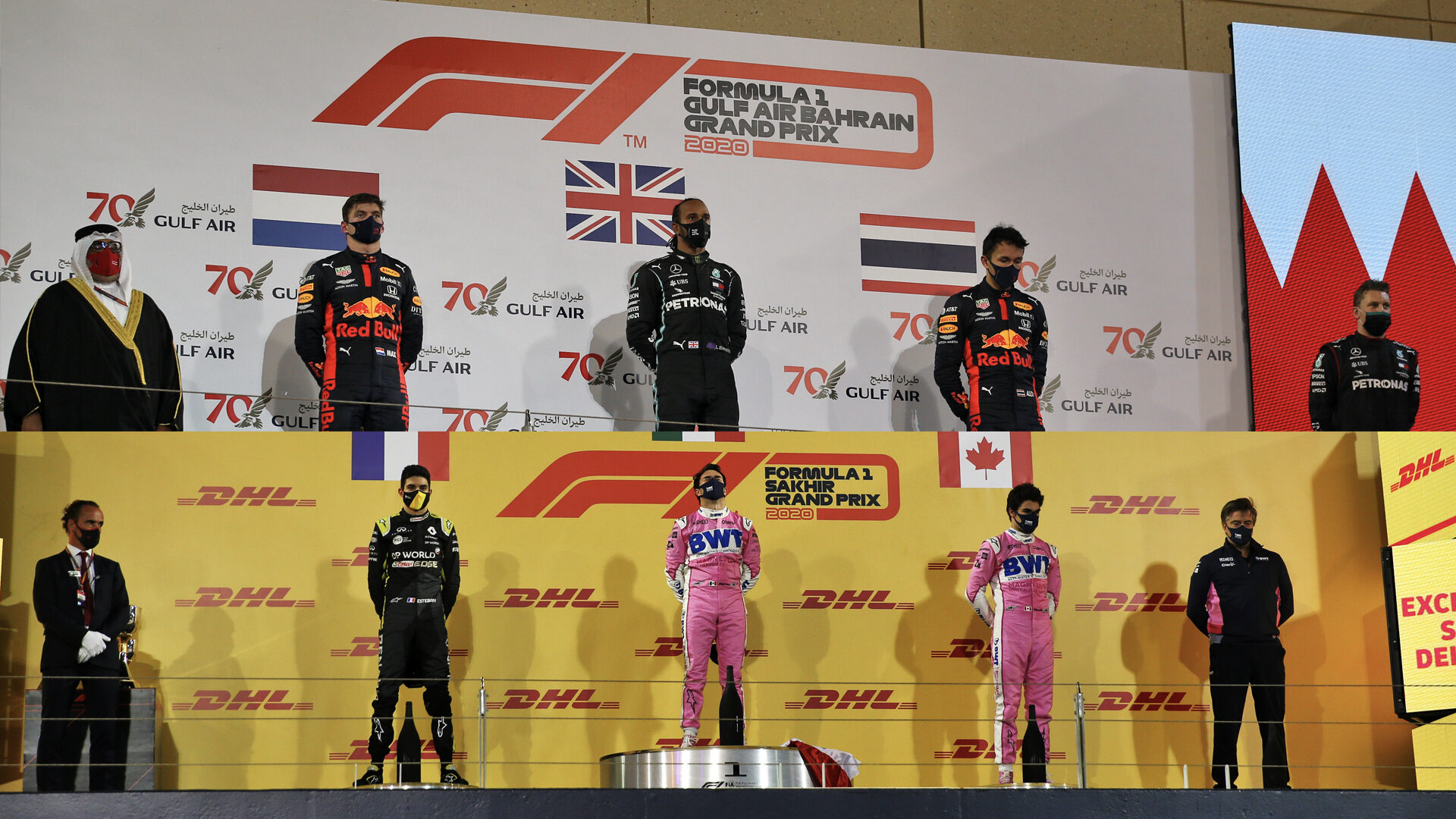 In a year which won’t be forgotten for so many reasons, Bahrain had the honour of hosting a double-header of races on consecutive weekends at BIC, much later in the year than usual, as the global pandemic forced numerous calendar changes.
In the first race, Seven-time F1 world champion won a drama-filled race at a brilliantly floodlit BIC, crossing the finish line under safety car conditions, with the Red Bull pair of Max Verstappen and Alexander Albon joining Hamilton on the podium.
The race was dominated by several major incidents on track, two of which took place without even a lap being completed. The first involved Romain Grosjean, who crashed his Haas into the barrier just moments after the start, resulting in an immediate red flag. Few will forget that dramatic footage on him emerging from his car, in what would turn out to be his last race in F1. Following medical treatment, all involved in F1 were delighted to see him back at the circuit a couple of days later.
Following over an hour’s delay, the race was re-started but then Lance Stroll’s Racing Point challenger flipped over, forcing a brief safety car period. When racing resumed after Stroll’s flip, Hamilton put in another masterful drive to continue his magnificent winning run this F1 season. He was able to build a massive gap from the rest of the field en route to the finish, but following car trouble for Perez, the yellow flag came out and it was a crawl to the end behind the safety car.
The very next week, F1 returned for the Sakhir Grand Prix, this time on the outer track, which had never been used for major racing before. In Lewis Hamilton’s absence, Racing Point’s Sergio Perez drove to a dramatic victory after 87 hotly contested laps, with Renault’s Esteban Ocon and Racing Point teammate Lance Stroll second and third. Perez started from fifth on the grid but had a disastrous first lap after getting involved in a turn-four incident that led to the retirements of Red Bull’s Max Verstappen and Ferrari’s Charles Leclerc. Perez was forced to pit but then did masterfully to battle back towards the front, where he was hunting down the Mercedes pair of George Russell and pole-sitter Valtteri Bottas. Perez inherited the lead when Russell and Bottas were called in for fresh tyres, but the team made some uncharacteristic mistakes and botched both pit stops, likely costing them a dream one-two.
BIC had the honour of welcoming over 5,000 of Bahrain’s frontline medical heroes and first responders as special guests for both races. 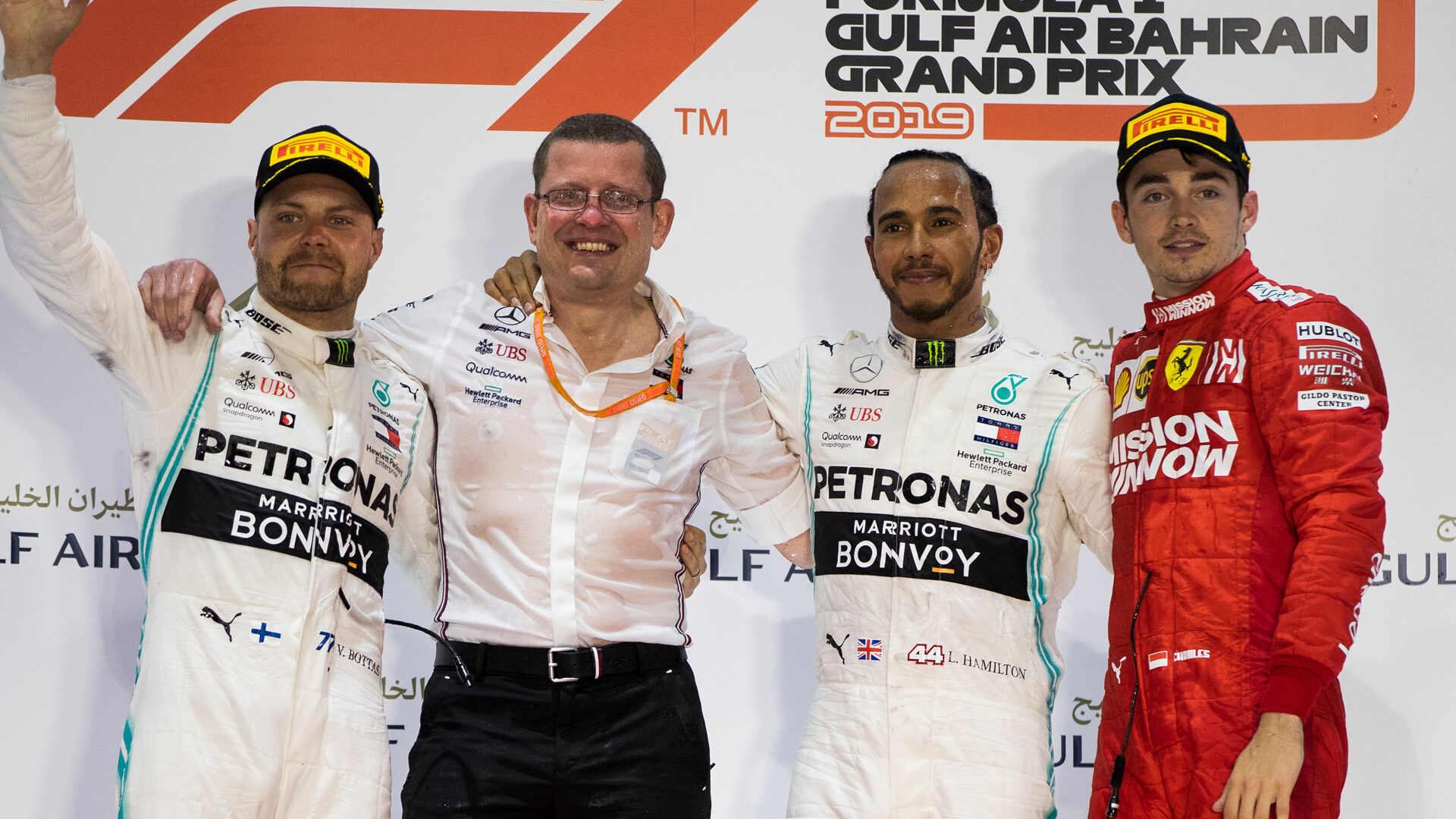 The Formula 1 Gulf Air Bahrain Grand Prix 2019 was an epic weekend of top-class motorsport and entertainment – the kind only Bahrain International Circuit can deliver. A huge crowd of 97,000 fans attended the event, including 34,000 on Race Day alone.

The Formula 1 Gulf Air Bahrain Grand Prix 2019 was an epic weekend of top-class motorsport and entertainment.

Marking race no. 999 in Formula 1’s history, it was also the 15th anniversary of the Bahrain event, with world class entertainment off track headlined by global superstar DJs Martin Garrix on Friday night and Kygo on Saturday night.

In another epic Bahrain night race, Lewis Hamilton claimed a stunning victory as he led teammate Valtteri Bottas to a Mercedes one-two.

They took advantage of a nightmare race for top rivals Ferrari, whose pole-sitter and race leader Charles mouseLeclerc suddenly suffered engine trouble with 10 laps to go. Leclerc led for most of the 57 laps but limped to the finish under safety car conditions, salvaging a first podium of his Formula 1 career.

Despite the heartbreak, a star was born in Bahrain as Leclerc had won over his rivals and fans over the weekend.

Overall, it was a spectacular Bahrain Grand Prix with 'Limitless' memories on and off the track. 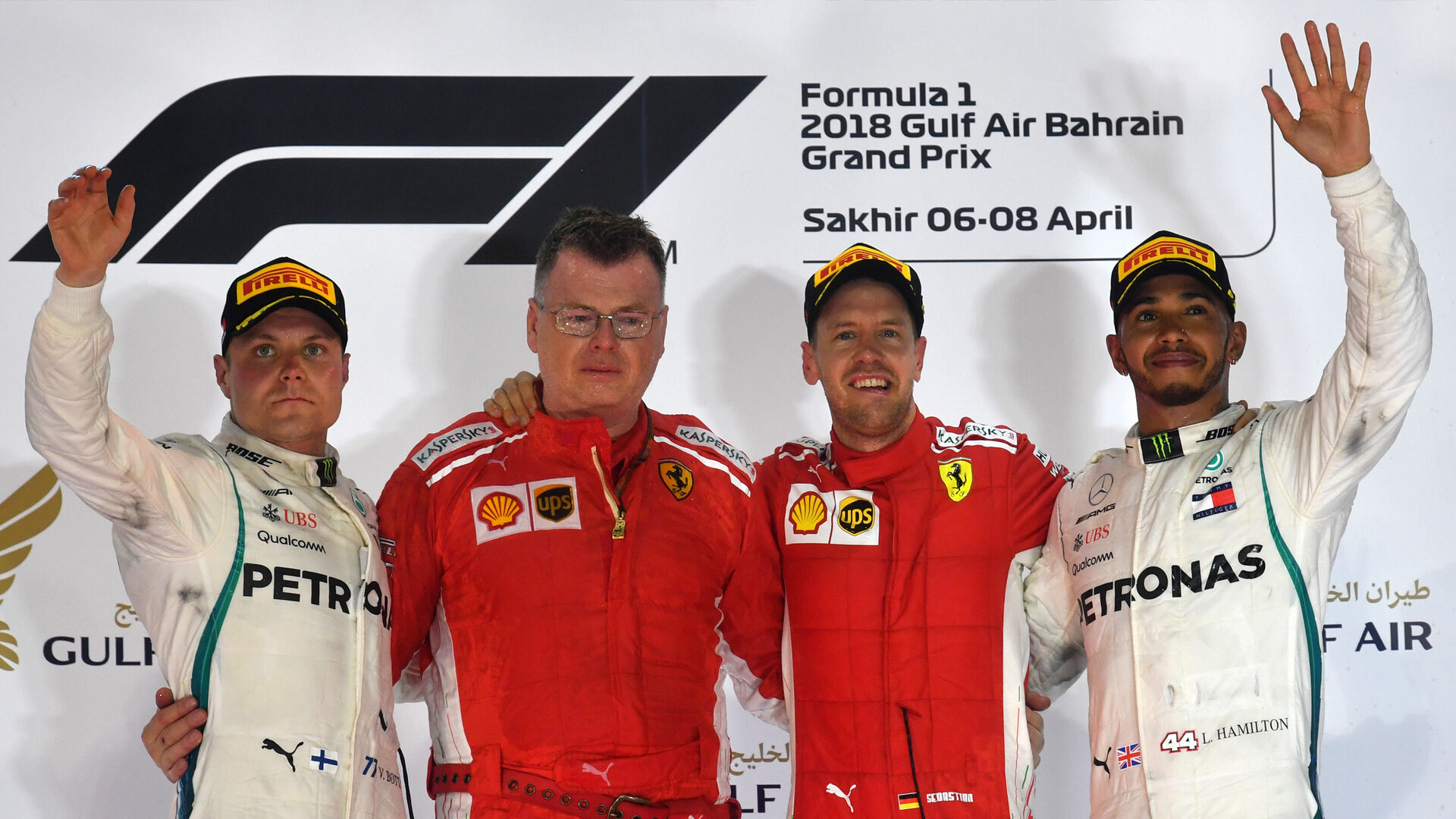 “The Home of Motorsport in the Middle East” enjoyed another spectacular year in hosting Formula 1. The Grand Prix generated record Paddock Club and Corporate Lounge sales, with the Paddock Club sales up 15% compared to the previous year.

Vettel overcame a threatening challenge from Valtteri Bottas of Mercedes who tried to chase him down and steal the chequered flag late on. But Vettel was able to hold on to the slightest of advantages despite a slower car over the race’s last few laps.

The German eventually won by just 0.699 seconds. He completed the 57-lap sprint after starting from pole in a total race time of 1 hour 32 minutes 01.940 seconds, taking the chequered flag as a brilliant display of fireworks lit up the desert sky.

Bahrain International Circuit once again provided the perfect setting for a sizzling motorsport spectacle, as a record crowd of 33,000 – and 93,000 in all for the weekend – enjoyed Formula 1 action at its finest.

After splitting the first two races of the season with Mercedes’s Lewis Hamilton, Vettel was eager to strike back and it was the star pair once again battling in the end for all the glory. This time it was the scarlet red of Ferrari taking the chequered flag as a brilliant series of fireworks lit up the night sky above Sakhir.

The German gained the lead from pole-sitter Valtteri Bottas during a safety car period early on in the race. At the re-start, he managed to stave off his rival and eventually built a comfortable advantage of over 10 seconds from the rest of the pack.

Vettel crossed the finish line with a winning time of one hour 33 minutes 53.374 seconds. Hamilton, who had been given a five-second time penalty for impeding Red Bull’s Daniel Ricciardo in the pit lane, had cut the gap to 6.660seconds by the end. Bottas had to settle for the final podium place 20.397s back in third.

Rosberg put in a dominant drive as he claimed his second successive victory to start the. He charged off the start line cleanly and immediately took over as the leader before enjoying a flawless and untroubled race from then on.

The win was Rosberg’s fifth in a row dating back to the final three races of last season and including Australia at the start of this championship.

Classified 11th to 14th were Pascal Wehrlein of Sauber, Daniil Kvyat of Toro Rosso, Jolyon Palmer of Renault and Fernando Alonso of McLaren.