Max and Sergio crash the Tifosi Festa: Analysis of the Emilia Romagna Grand Prix, brought to you by Bahrain International Circuit

F1 was back to Imola and for the first time this season a sprint race formed part of the weekend. As a reminder, the format of these weekends means that qualifying takes place on a Friday, which sets the grid for the sprint race. The sprint race on Saturday is run over 100km (21 laps of Imola) with points on offer for the top eight. Points were only on offer for the top three last year, so this difference adds more significance for these shorter races. The result of the sprint race then sets the grid for the main Sunday race.

In Friday’s qualifying, the weather played a major part with rain never far away, leading to five red flags during the session. Under a clear track, once again there was little in it between Ferrari and Red Bull, with Verstappen pipping Leclerc to pole. Further back, Norris was an impressive third, making the most of difficult conditions. Elsewhere, Mercedes continued to be the big story as it struggled as much as ever in qualifying, with Russell 11th and Hamilton 13th. The Silver Arrows fared no better in the following day’s sprint race, with the team and drivers all admitting that their chances of fighting for a championship this season are now almost non-existent.

The sprint race itself was all about a head to head duel between Verstappen and Leclerc. Leclerc got the better start but never managed to shake off the Red Bull which, for the majority of the race, was never more than two seconds behind. With Leclerc’s tyres beginning to fade on lap 19, Verstappen got within DRS range and took the lead with two laps to go. With his tyres obviously in better condition, Verstappen held that lead easily for the win. Their teammates both put in impressive fights, with Perez coming from seventh to finish third and Sainz moving from tenth to fourth. Norris and Ricciardo took fifth and sixth, with Bottas and Magnussen taking the remaining points.

Race day was a sea of red in the grandstands, as over 60,000 fans packed into Imola with the passionate Tifosi celebrating the first F1 race held with fans at Ferrari’s spiritual home since 2006. Those celebrations were short lived, however, as early contact between Sainz and Ricciardo put the Spaniard out on lap one. At the front, Verstappen got off to the perfect start in damp conditions, with all cars starting on intermediate wet tyres. Leclerc struggled off the line, offering Perez a chance to move up to second, with Lando Norris having an encouraging early start too. It stayed much the same at the front, even after a round of pit stops on lap 19, where everyone switched to the dry tyres. Verstappen remained almost entirely untroubled at the front, as did Perez, despite coming under occasional pressure from Leclerc. On lap 51, Leclerc decided to stop for fresh tyres in the hope he could come out, retain his position, but also have a chance for a fastest lap. However, an error on lap 54 put his car into the tyre barrier and he required a further pit stop for a new front wing. He came back out in ninth and recovered somewhat to finish sixth. It marked a difficult day for Ferrari, where expectations from the home crowd were incredibly high.

All this meant that the two Red Bull cars breezed to their first one two in F1 since 2016. With Verstappen winning, as well as taking the bonus fastest lap bonus point and full points in the sprint race, this weekend felt like a turning point after a difficult start to the season. Having been 45 points behind Leclerc, that gap is now down to just 27 and the momentum now feels very much in Red Bull’s favour.

Equally happy was Lando Norris, who, for the second year running picked up a podium in Imola. He admitted to being surprised with such a positive result, but there is no question that the fortunes for the team have been transformed compared to where they were at the pre-season test here in Bahrain.

At the other ends of the scale, the misery continued for Hamilton, who managed just 13th with Russell faring better in fourth. Indeed, there was a moment any F1 fan would scarcely believe on lap 41, when Max Verstappen lapped him, which feels unthinkable when you look back to the epic battles between the two just a few months ago.

F1 takes a week off before taking its first trip to the Miami Grand Prix, with race day set for 8 May. There is huge anticipation for F1’s latest addition to the calendar and it’s first trip to the US this year. From all accounts, it’s expected to be quite a spectacle. 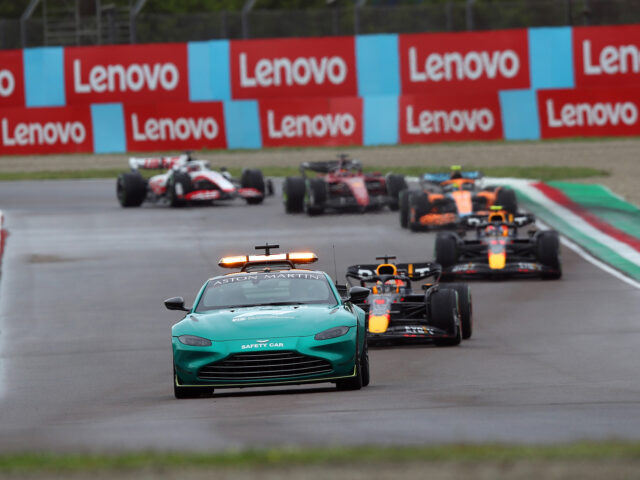 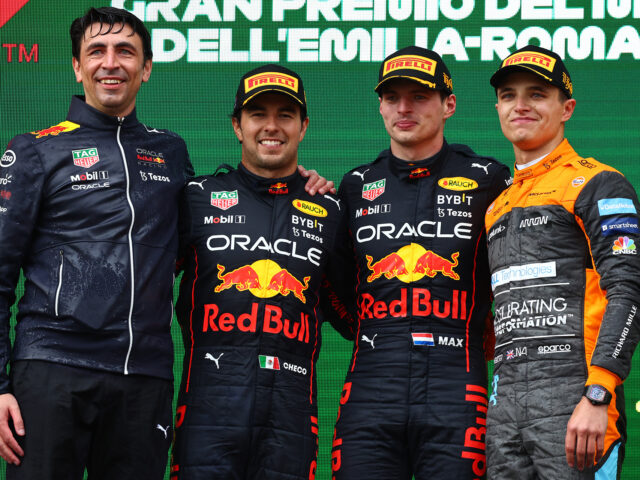 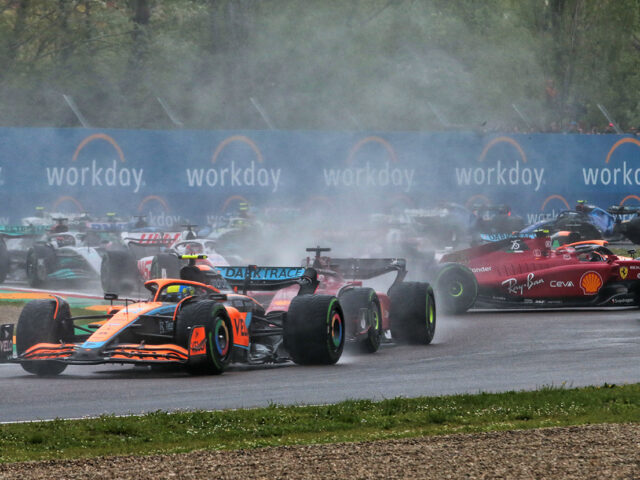 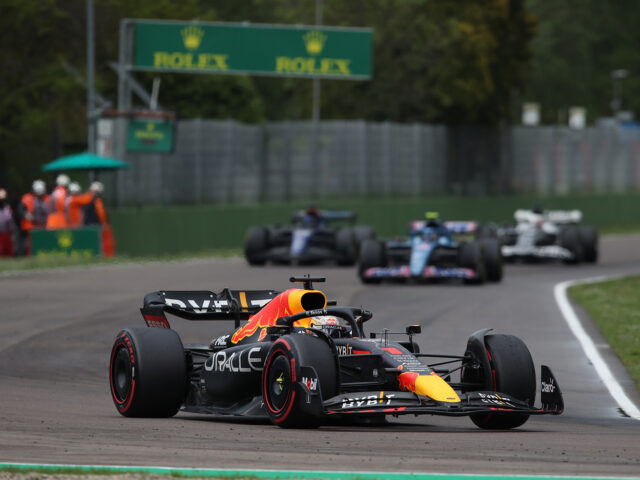 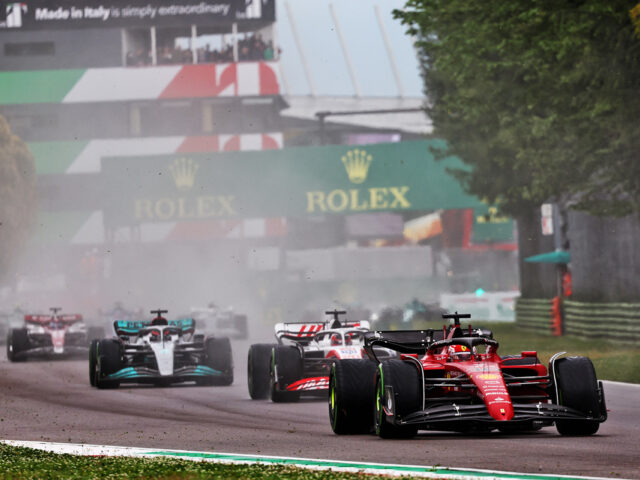 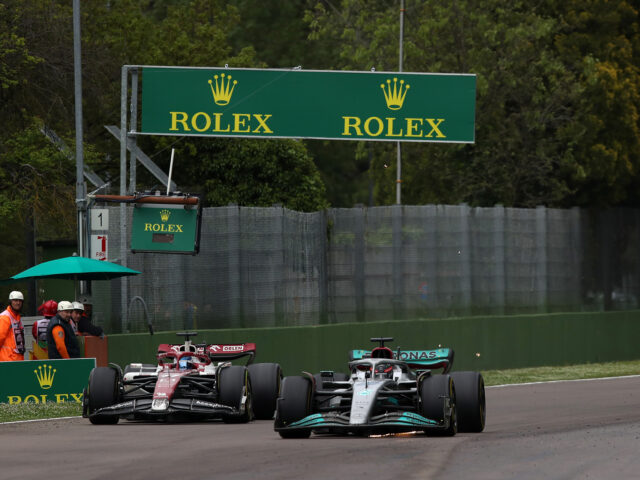 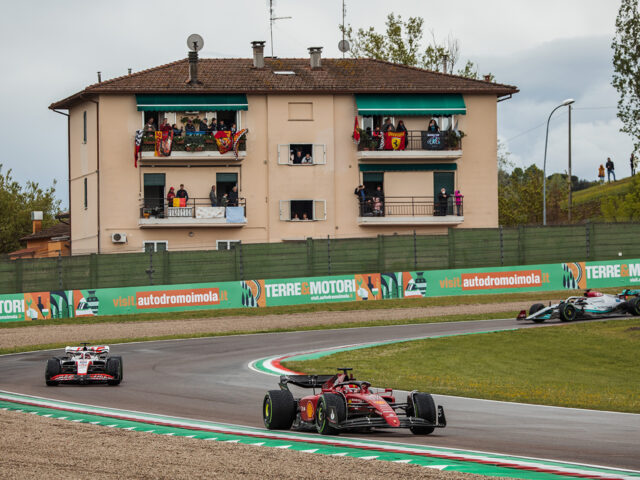 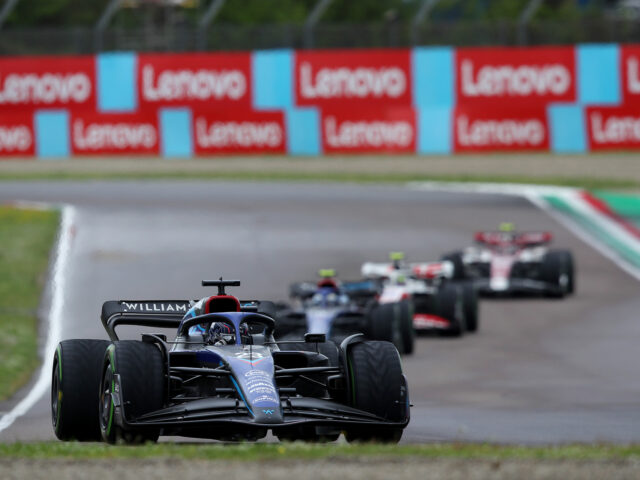